My favourite movie of all the time for sure, with iconic stars, immortal quotes and timeless love story. It's hard to believe but this iconic movie debuted 75 years ago.
So let's take a look at some of the best looks that Ingrid Bergman rocked as Ilsa Lund in this ultimate story. 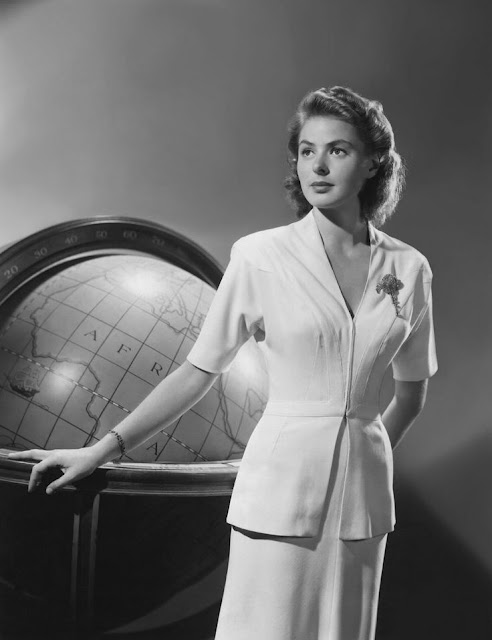 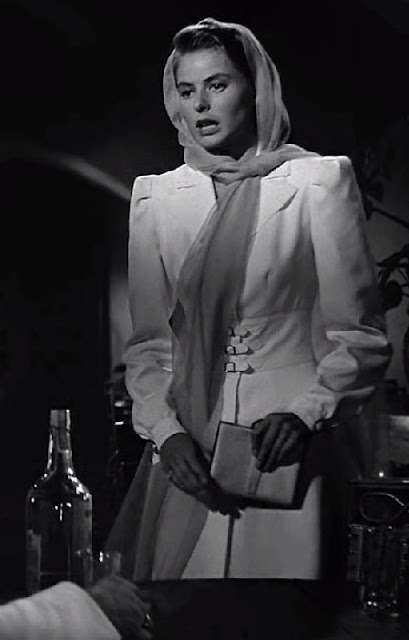 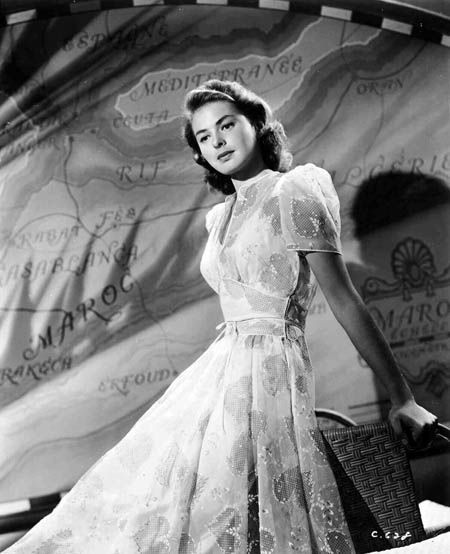 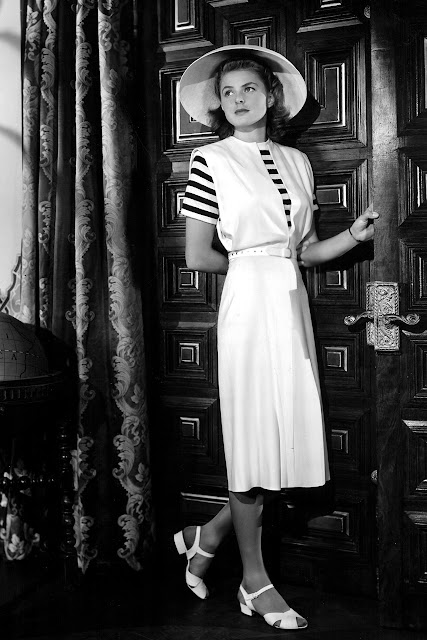 As you know, Blake Shelton is 2017's sexiest man alive, but internet have some thoughts about that , so do we.
I mean, he is an attractive man with his salt and pepper hair and his blue eyes, but what about the fantasy of Idris Elba? 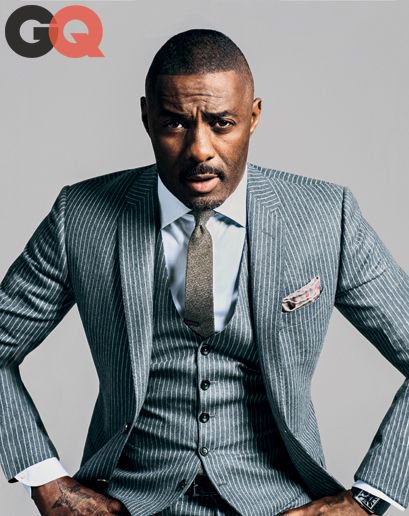 And right in front of Colin Farrell? 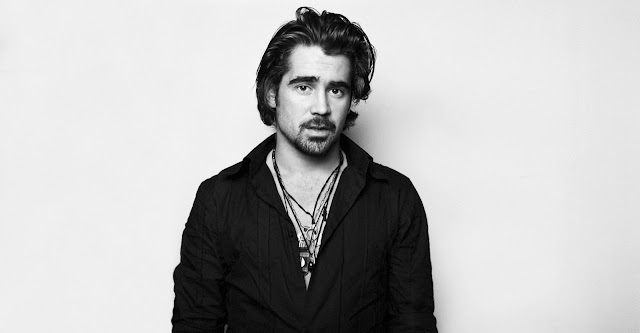 And have you run through every Chris already? Think not, since only Hemsworth was named with the title so far. Think about how blue eyed bro, Chris Pine is watching you right now! 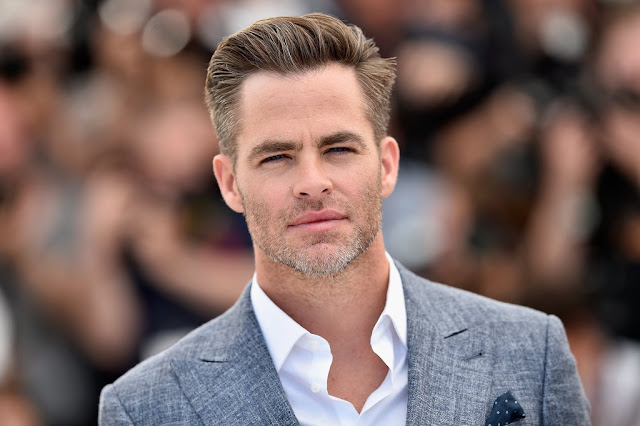 Or Chris Evans with his dog? I mean, come on, even sexiest man alive disereves a best friend. 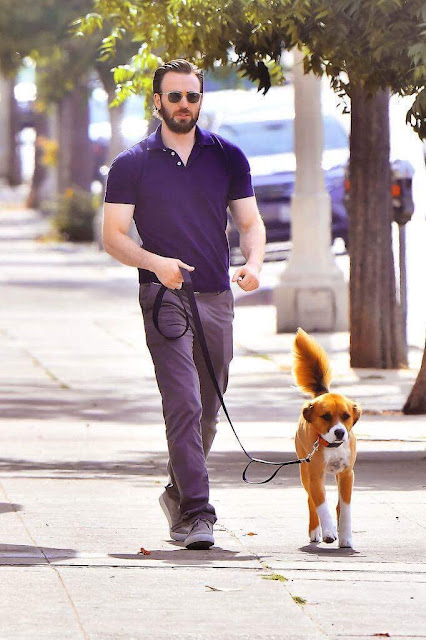 Or even the kind of easy on the eyes crush you won't mind sharing with your little sister Cole Sprouse? 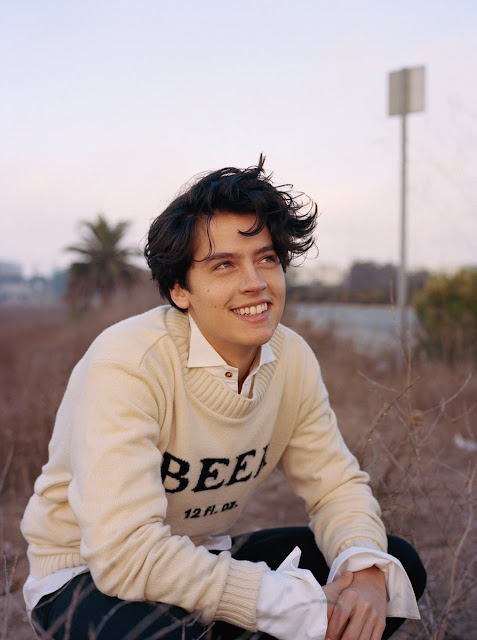 Is Jesse Williams a ghost? 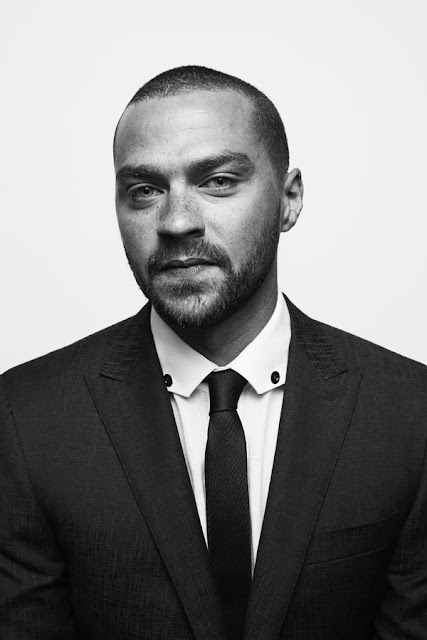 We need to give some credit to Blake because he's only 4th non - actor who won the award since 1985 (before him, there were only  John F. Kennedy, David Beckam and Adam Levine).
But in the world where Bruno Mars exists, is Shelton a choice? 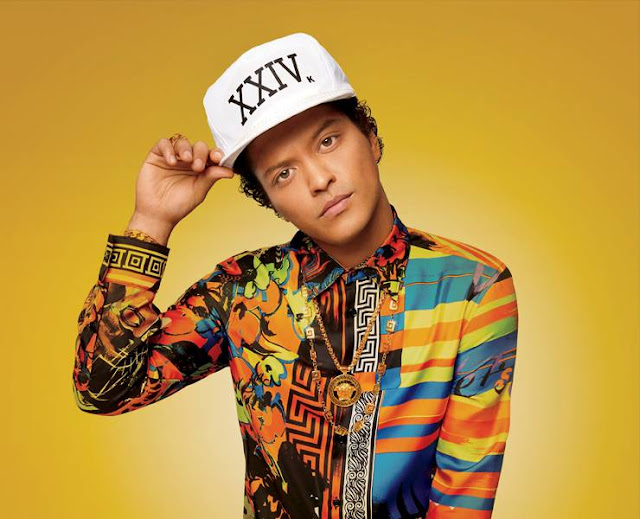 Haven't you heard of Hotline Bling himself? 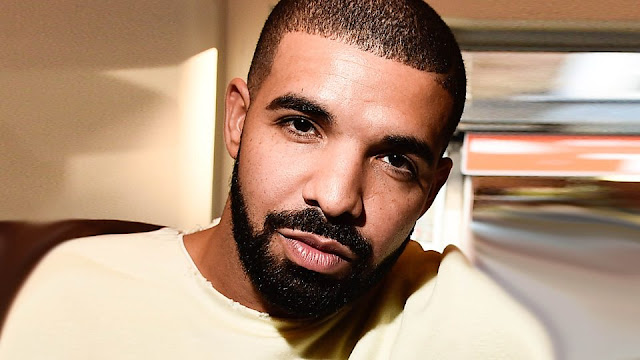 Or the man with an unquestionably seductive music Frank Ocean? 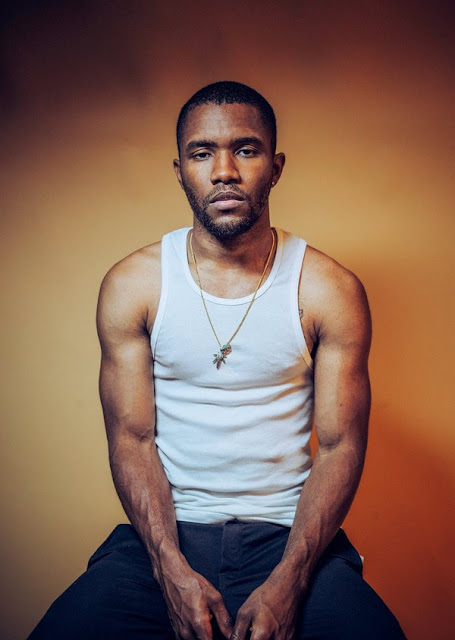 So we can definitely say, this is a strange, sexy world for sure.
What about you, who is for you sexiest man alive?

Meet Taika Waititi: A Hollywood outsider with the sense of style

I saw "Thor Ragnarok" this past weekend and I have to say I LOVE it! So funny and so refreshing.
If you follow me on instagram , you know I'm such a geek when it comes to superhero movies. Kinda a die hard Marvel fan. And I thought that "Thor" (2011) is the best one so far, but come on! This one is one hell of a journey. Every single moment with Tom Hiddleston's Loki is epic. Mark Ruffalo's Hulk becomes much more interesting to watch. Chris Hemsworth's Thor finally shows us his personality. Cate Blanchett's Hela is gorgeous and menacing at the same time.
I will not reveal the plot or some spoilers of the movie, I want you to enjoy yourself first, but be sure, you'll not be dissapointed. 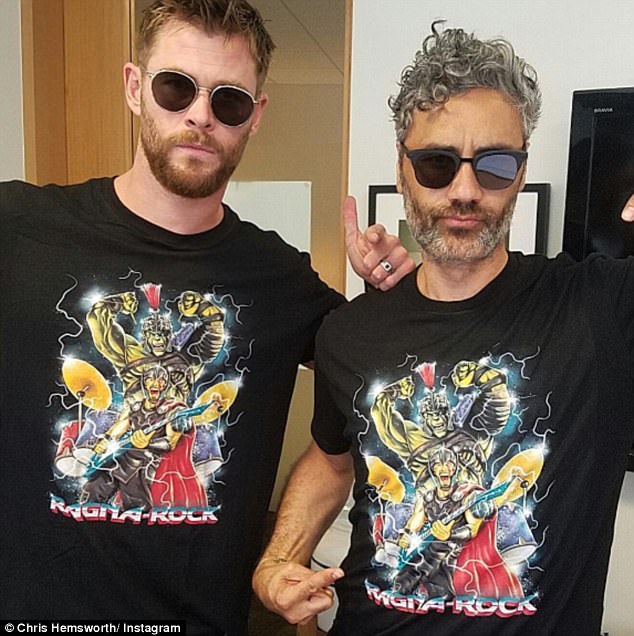 For now, I'd like to talk to you about the man behind the movie, Taika Waititi. Who is this guy and why does he have such a sense of style? 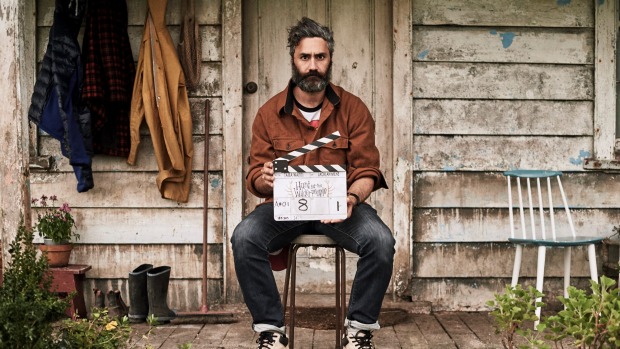 Taika Waititi is a New Zealand actor, director, writer, comedian with Maori and European - Jewish roots, a member of the "Academy of Motion Picture Arts and Sciences" (AMPAS) since 2016.
His mother is a Russian descent and he's used her surname, Cohen, for some of his work in film and writing, but to avoid confusion kept Waititi that used only as painter and artist first.
His first project was a short movie called "Two Cars" which was inspired to write while hanging out in a g-string, fully waxed for an acting role as a stripper in a TV show "The Strip" (2002).
But his first noticeable movie is 2010's "Boy"that is filled with '80s aestetics, unexpected laughs, and pleanty of complex family relationships. Fun fact about this one is that it's been filmed where Taika grew up; some scenes, concrete, were filmed in his aunts' house.
During college time, he met Jemaine Clement (recipient of the New Zealand's highest comedy accolade the Billy T Award) and together became the comedy duo The Humourbeasts.
Later on, they joined forces for horror comedy "What We Do In The Shadows" (2010), where they played members of a group of vampires who live in modern - day Wellington. The most interesting part about this movie is that actors had only directions and the whole script was improvised.
This is followed by a wonderfully offbeat comedy "Hunt For The Wilderpeople", based on a book by the late Bary Crump about a young boy and a grumpy man on the run in the forest.
Even though he started once in a superhero movie, "Green Lantern", "Thor Ragnarok" is his masterpiece scoring $121 milion in the opening weekend.
But lets go through his style and why I think this man is not only a comedy God, but also a style icon.

1. Picture of his pineapple short set is the best thing you'll see today 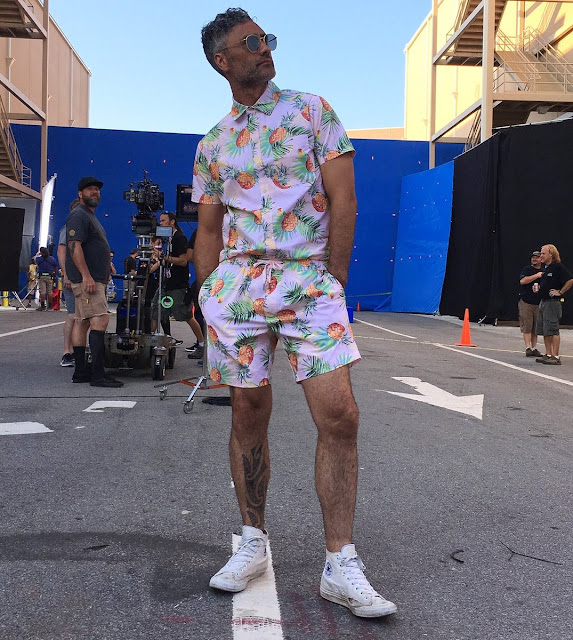 2. Colorful and plucky prints are his thing and thank God for that 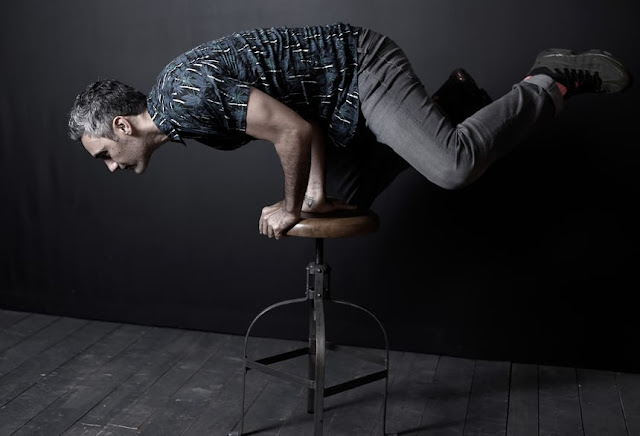 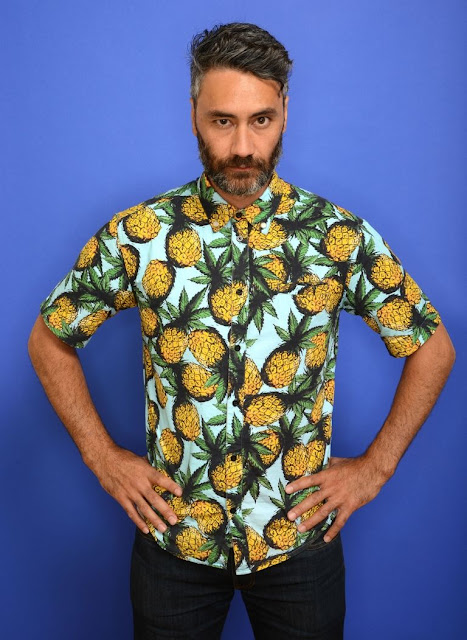 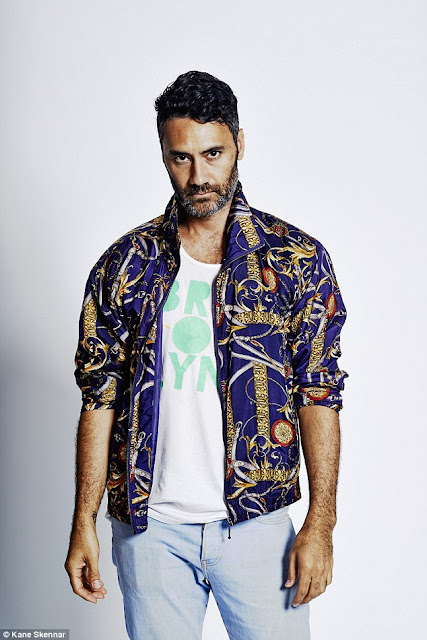 3. Hats and caps are obligatory and we're totally in 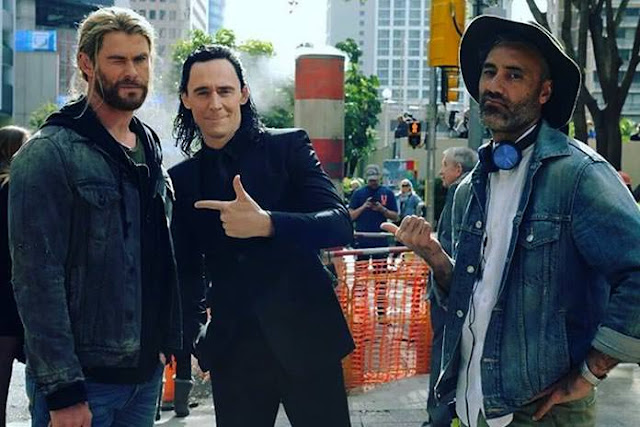 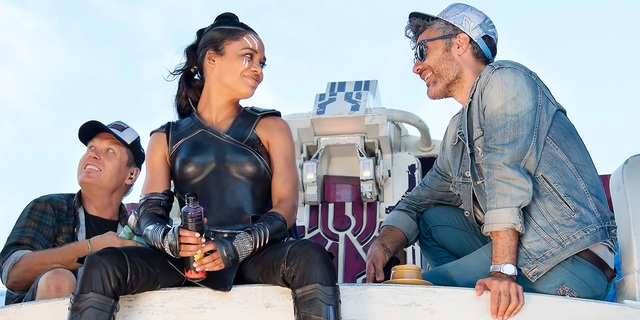 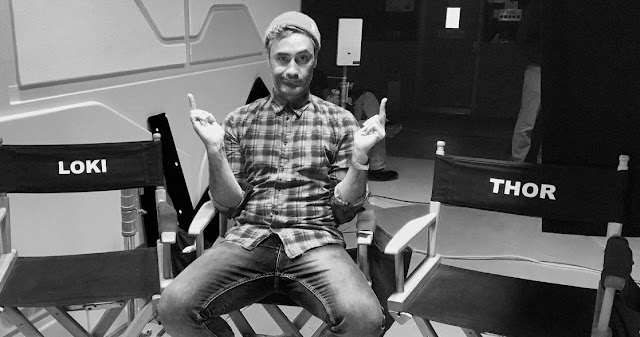 4. Pulling out denim on denim and we love it 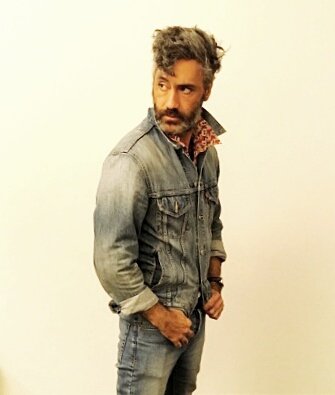 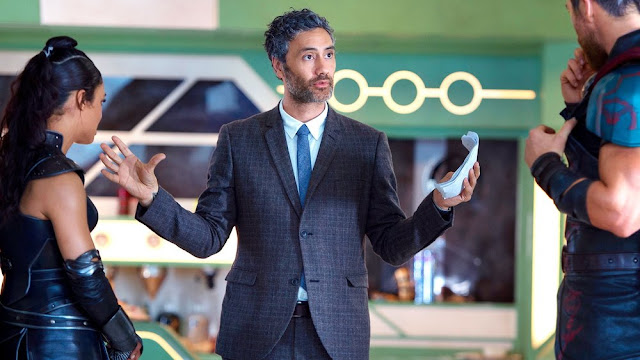